Kitchen Garden Project (KGP) for 7th through 10th grade Students of 23 regional schools
2019: Susila Dharma USA is proud and happy to report that Anisha is about to finish a successful third year of its Kitchen Garden Project, which was made possible by a generous grant from the Guru Krupa Foundation and donations from SD USA and other SD Nationals and individuals. The Guru Krupa Foundation which is based in the State of New York, has given $10,000 (USD) yearly to Anisha since 2016 to teach up to 1400 middle school students of 23 regional schools to establish organic kitchen gardens at their homes. These students live in the Martalli Region of Karnataka State in Southern India, a poor and drought-prone area that is also hard-hit by the effects of climate change. Learning to plant a  small-scale kitchen garden producing organic vegetables grown from native seeds (initially supplied by Anisha’s own native seed bank) can make a significant difference to household economy and health. Placed next to the house, these gardens are less prone to suffer at times of drought, due to available wastewater and other strategies of water conservation. 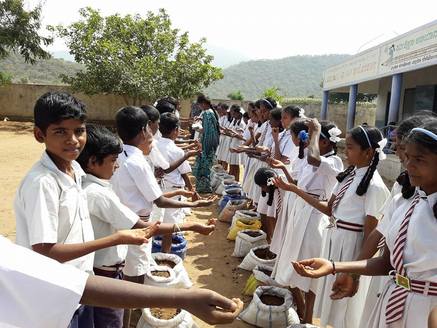 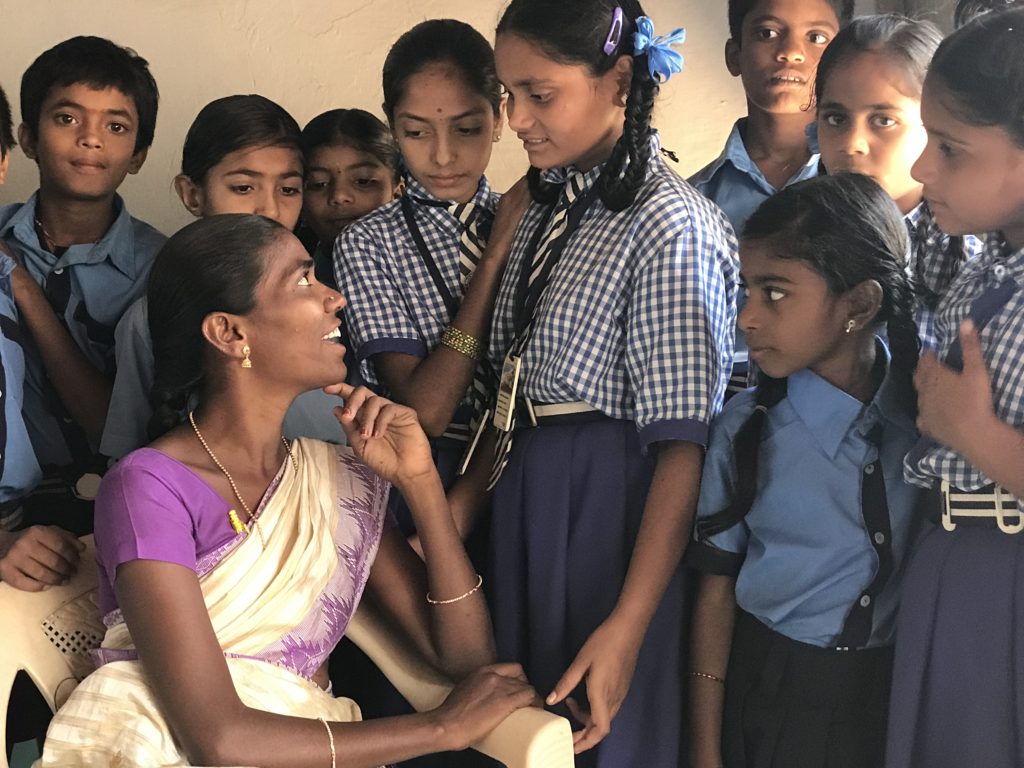 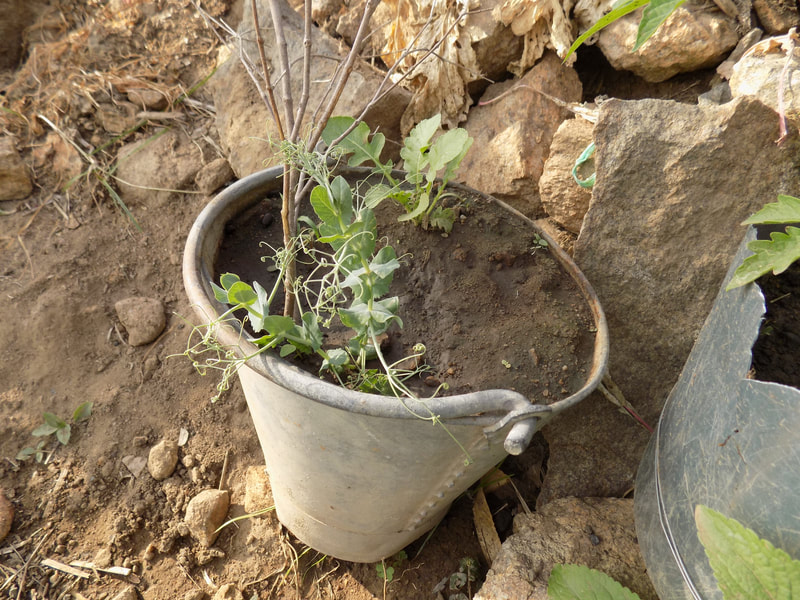 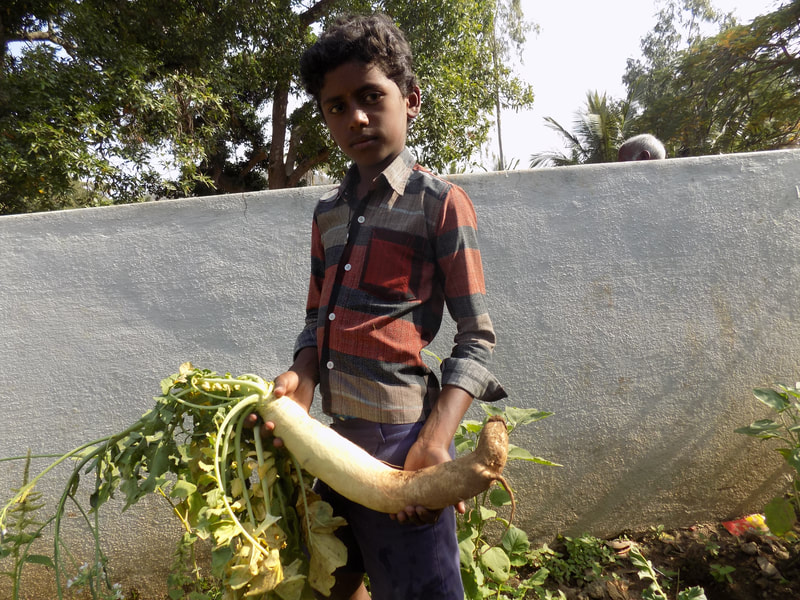 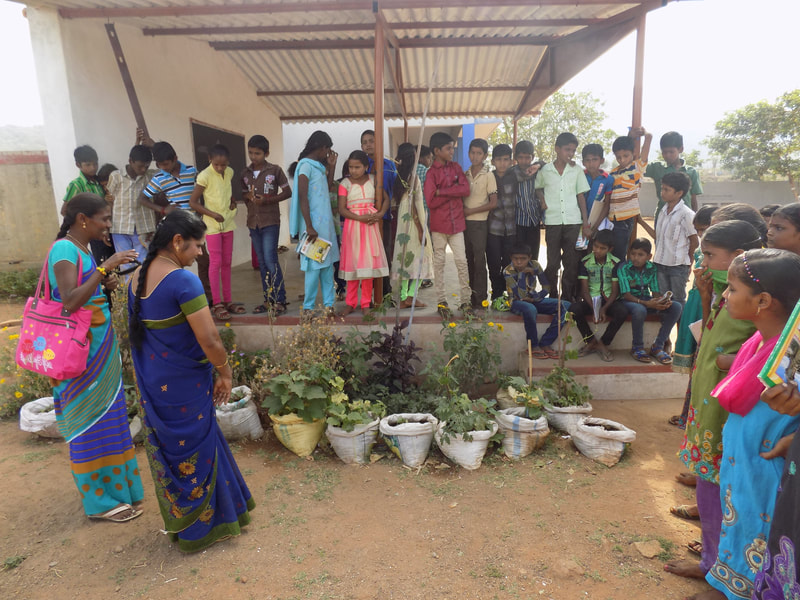 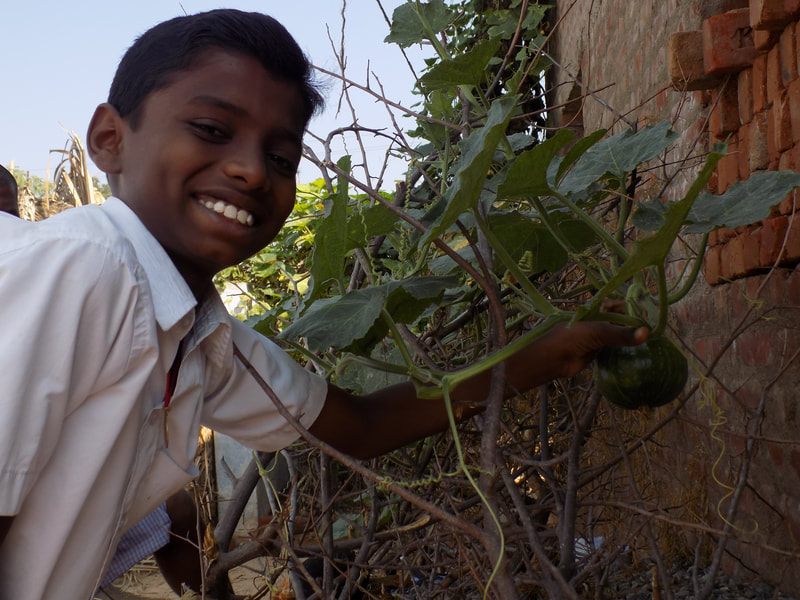 ​In the second year the economic benefit for the participating families has been measured for the first time, coming to the result that each family saves/earns approx. 6 USD/month in the gardening season through the activities of their children. A substantial contribution/saving for the family budget for the majority of them. In the third year, 189 new seventh graders were baselined into the Kitchen Garden Project and given a pre-instruction exam in organic kitchen gardening knowledge, and an attitude survey.  The 1,047 returning participants were also included in the orientation sessions. All 23 participating schools have now orientations that can be adjusted to adapt to the particular circumstances of each school, with both new and returning students. The data this year show that 1,236 students are participating, and that there are 1,112 students growing gardens at home. This is 90% of all participating students this year. This excellent result was also reflected in a rise in yields and the variety of native seeds that were saved. 59% of the students doubled the target yield, in spite of a long spell of water shortage. The majority of the 951 interviewed parents was speaking of a meaningful contribution to their households budgets. In a local economy that often leaves residents with little or no cash to spend, this is a signiﬁcant amount of money.

In the final year (year 4) of the project, Anisha has reached a number of 1,426 participating students, achieving its original goal of 1,400 students by the fourth year. Of this number, 1,361 students are currently growing a garden. Starting with 743 participating students in Year 1, the program has added new students each year while retaining the former ones. This model has produced a rolling effect of creating approximately 200 post-tenth grade students each year who either remain in their village or go on to new educational settings. They bring their kitchen gardening skills and experience with them. Some students who have gone on to boarding school settings have started kitchen gardens there. Forty percent of the children in the KGP spread the native seeds they saved from their own gardens to neighbors, relatives and friends. Younger siblings and family members of all ages have adopted organic kitchen gardening and are continuing the work at home. They have learned the benefits of organic kitchen gardening, and many lives have been changed for the better. Anisha has slowly begun to reshape the local food culture in the Martalli Region.

School Kitchen Gardener’s Food Festival at ANISHA Resource Center in 2017
This program was designed to become an event for a number of reasons: Primarily it was an occasion for the children of Martalli Panchyath to get together and share their produce. It was decided that we give an opportunity for the children to involve in a group activity like cooking and sharing the meal. The response to this activity was overwhelming and more than 120 children gathered. They all brought vegetables from their gardens. A dozen teams were formed and a stock of 130 kgs of vegetables thrown open to them. From spinach to mammoth sized bottle gourd, there were twelve varieties of vegetables in all, and the children had their choice of a copious share of garnishing materials from the kitchen and the garden at Anisha. The teams prepared about thirty dishes in three hours. There was a festive mood in the campus and children hurriedly carted firewood, chopped the vegetables and stirred the pot in a competitive frenzy. Mr. John Don Bosco, and John Britto, cultural delegates from the locality, were invited to taste the recipies prepared by the children and comment upon it. They both were spellbound by the results and applauded the culinary skills of the children and their knowledge of the  nutritional values of the vegetables they had used. Anisha’s kitchen had cooked rice en masse which was served to all the children, and  which they enjoyed with the curries they had prepared. 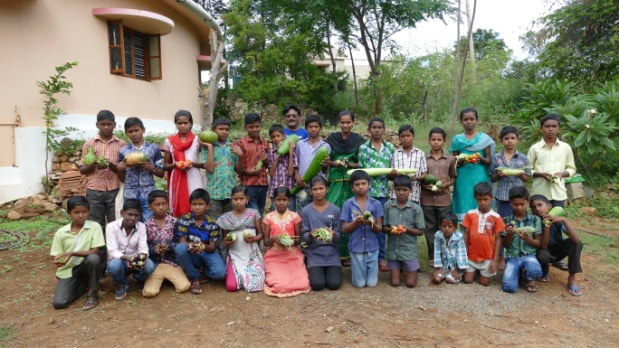 
​
In December 2018, Aminah Herman of SD USA writes:  A morning of thanks at Anisha as students drew pictures about their gardens and talked about how they felt growing vegetables for their families. We showed videos we made of them for our reports and shared lunch, gave out gifts of art supplies and special sweets were give in appreciation for their time. At this event we had about 30 out of the 1000 students in the Kitchen Garden Project. 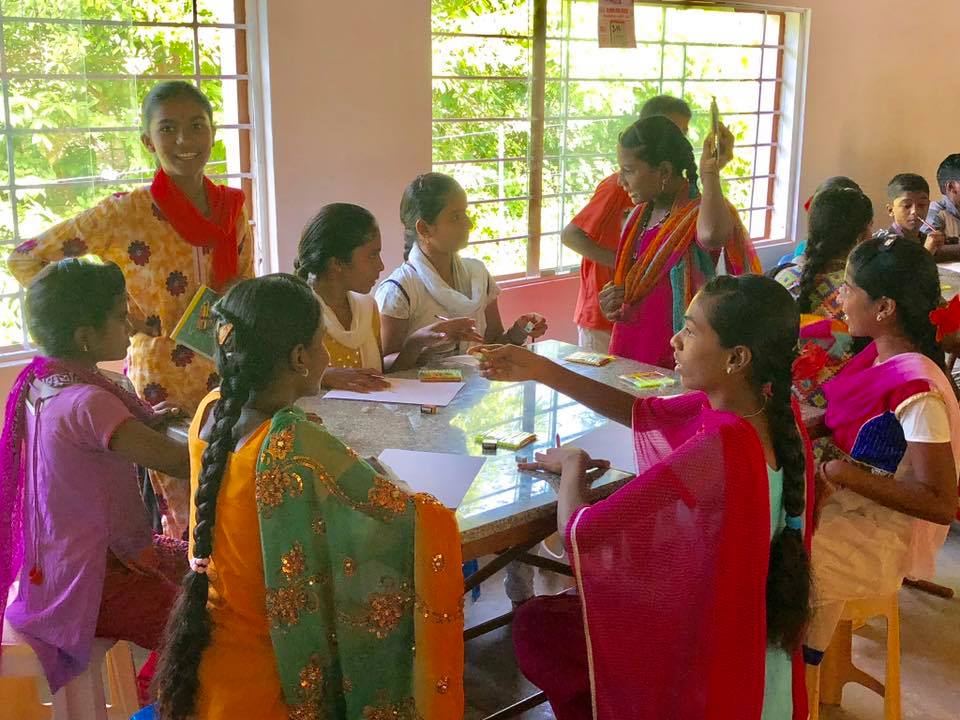 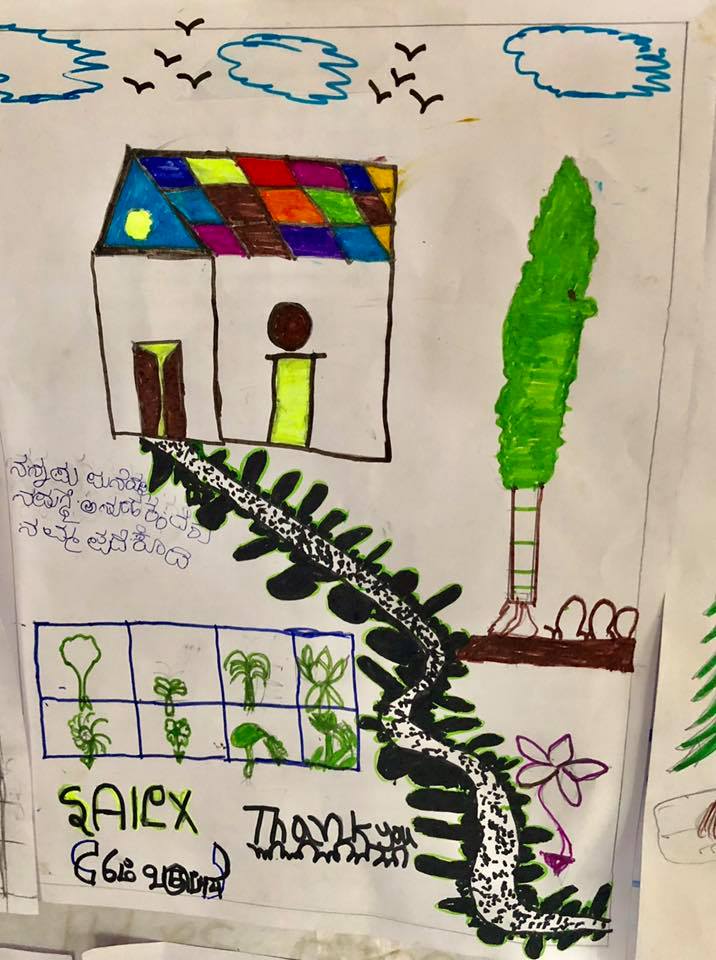 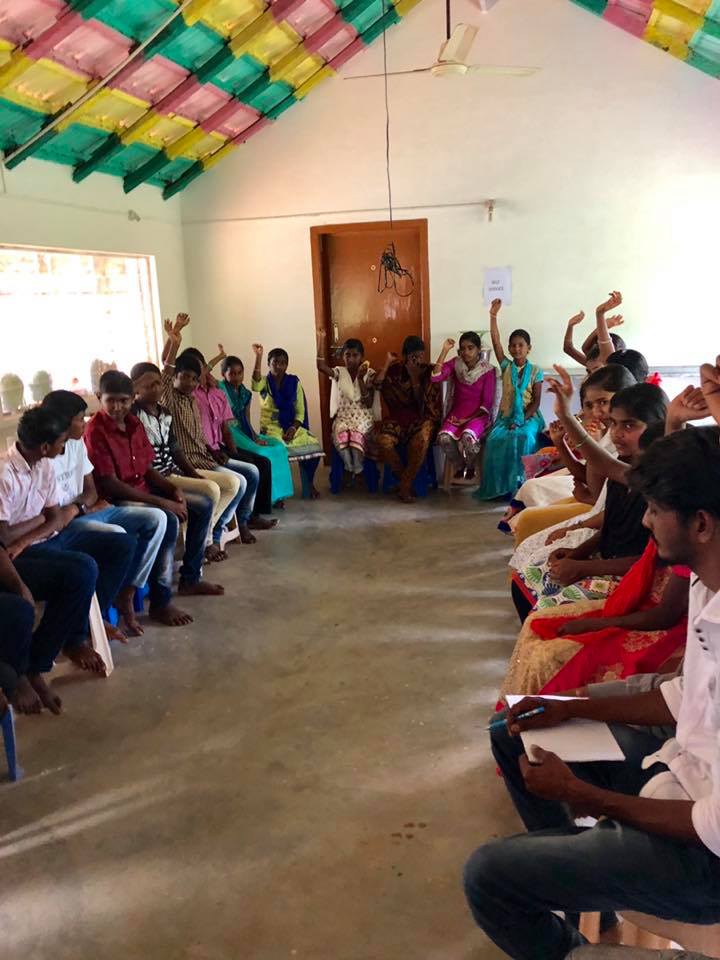 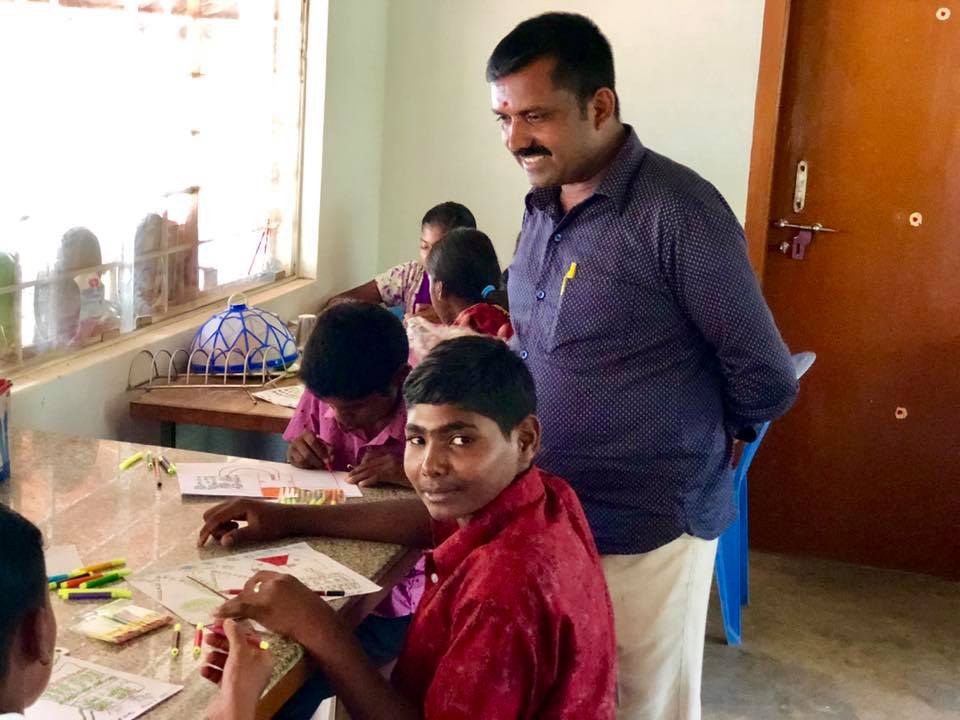 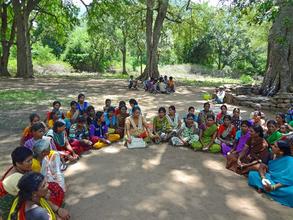 The kitchen garden project with tribal communities took place in three villages. Even though there was a water scarcity in the village these 130 families grew vegetables like radish, okra, field bean, tomato pumpkin, bottle gourd and sponge gourd. 102 families saved seeds from the previous harvest and Anisha provided seeds for the remaining 28 families. On an average 10-12 kgs. of vegetables was grown and consumed by each family. 130 families generated 1331 kgs. of vegetables and saved Rs.37,700/-. Anisha staff visits the villages once a month to provide ongoing support.